Most of us were raised with different ideas about health and how we get sick.

But did you know that many of those things that were taught to us as children are actually myths?

I was surprised too at first, but it’s the truth.

Much of what we are taught about getting sick, and other health issues are just stories that have been handed down through generations as being the truth but which actually have no basis in fact.

Here are some of the more common health myths debunked…

#1  If you swallow a piece of gum it will take 7 years to digest.

We all heard this one when when we were kids, but there is no truth to it. Mom just didn’t want us to swallow a lot of chewing gum. At one time, it was thought to be lower class to swallow gum, so parents didn’t want their kids appearing less than acceptable to society. While gum will not be digested per se, it does pass through your system in a lump. #2 If you stay outside when it’s cold and windy, you’ll get sick.

Cold winter weather by itself cannot make you sick. The only way you can get a cold is from a virus that you breathe in through droplets in the air. One of the best ways to prevent getting a cold is to wash your hands with warm water and soap often.

#3  Reading in low light will make you go blind.

This is completely false. Our ancestors used to read, sew and do a number of other chores by firelight, and none of them ever went blind from it. Research shows that reading in low light can strain your eyes, but they go back to normal as soon as you turn a brighter light on.

#4 To be healthy, you have to drink 8 glasses of water a day.

Turns out, this well known health tip is also false. Research shows that it can actually be detrimental to drink too much water, as it can cause a condition known as water intoxification. Water intoxification is caused by an electrolyte imbalance that swells your cells with excess fluid; it can even cause death. The truth is, we get plenty of fluid from the foods we eat and the fluids we drink, even caffineinated drinks.

#5  You can tell what sex a baby is going to be by how the mother is carrying the baby. 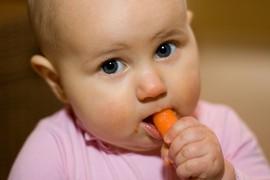 #6  If you don’t eat your carrots when you are a child you will go blind as an adult.

Yup, we all heard this one when mom wanted us to finish those carrots! While there is some basis in truth for this, it is very little. Those who have a healthy diet in both childhood and adulthood are not going to have their vision affected simply because they failed to eat carrots. Those who live in countries where they might not get enough Vitamin A are in danger of going night blind. However, if their diet is supplemented with foods rich in Vitamin A, such as carrots, their vision can be improved.

#7 Feed a cold but starve a fever.

This is another old wives tale that has no basis in reality. Anyone who has a cold and or fever needs a certain amount of nutrients and fluids to get better. Without them, the body has a more difficult time fighting off the cold and or fever.

#8  Colds and flu are at their most contagious before any symptoms appear. #9 You get acne because you aren’t washing your face right.

Nope, acne is caused by the effects that hormones have on your sebaceous glands. This is the reason teenagers often have problems with acne. Howver, too much washing of your face can actually cause you to get more acne, because the body must compensate for the body oil that you are getting rid of by washing your face too much.

#10  Women should rest during their periods.

Actually, women should do whatever makes them  feel better during their period — including exercise. Exercise can, in fact, make you feel better because it increases endorphins, which are a hormone that makes you feel happy.

#11  You have to wait a half hour after you eat to go swimming.

While there is a theoretical concern based on the fact that the body diverts the circulation of blood to the gut and away from the musclest that this might possibly cause a cramp, no one has ever drowned because they went swimming with a full tummy. Going swimming
after eating a big meal might make you uncomfortable, but it won’t cause you to drown. And even if you did get a cramp, in most cases you could easily exit the water before any real damage is done.

This is one of those old wives tales at work again. A sunburn is just that: a burn. You do not need to burn before you get a tan. In fact, because of the health risk, you should never attempt to get a sunburn in order to then get a tan as it causes skin damage. Too much exposure to the sun can also cause skin cancer, so don’t do it. #14  When you shave the hair grows back thicker and faster.

A study that was done 80 years ago actually proved that this was not true, but many people still believe it today. Hair is dead. So shaving it is not going to make it grow faster. What makes hair grow are the follicles beneath the surface of the skin, and what comes out is dead by the time it reaches the skin’s surface. It appears to be darker and thicker because it hasn’t been exposed to the sun or chemicals for very long.


#15 Drinking coffee can cause you to get heart disease.

There is no evidence to support this idea, as long as coffee is drunk in moderation. In fact, a study showed that over a period of 10 years, women who drank up to 6 cups of coffee a day did not show an increased risk for heart disease.

#16  Drinking coffee can cause you to get ulcers.

It used to be thought that coffee contributed to excess stomach acid, the main cause of ulcers. As such, it was believed that coffee could be a cause of ulcers. However, recently it was determined that ulcers are caused by a certain bacteria, and that these ulcers can be cleared up by the use the antibiotics.

Well, we’ve all thought this around the holidays. But, in reality, the sleepiness we feel is from eating a large meal, not from eating the turkey itself. It used to be thought that the tryptophan in turkey is what made us sleepy, but it has recently been discovered that ground beef and even pork have more tryptophan than turkey. Well, um, actually that’s not true. I grew up thinking this was true, and I in fact can remember seeing science shows on the PBS channel when I was a kid, that talked about how we only use 10% of our brains. However, with the new imaging technologies it has been shown that there is no part of our brains that is not active in some way. So, this is a myth.

#19 Eating a low-fat diet is healthy.

In the 90’s everyone was doing low-fat. There were low-fat cookies and other sweets, even low-fat pasta. You name it, and there was a low-fat version. The truth is, the human body needs a certain amount of fat to stay healthy, so you can overdo it with the low-fat diet. Also, many of the items that are low-fat tend to replace fat with sugars, which as you know, can lead weight problems. So, picture the woman who thinks the cookies are low-fat so she can eat as many of them as she wants… The sugars used to replace the taste that the fats used to give the cookies can cause weight gain and a whole host of other health problems.

There are literally hundreds of health-related myths and old wives tales. Fortunately, technology is catching up with most of these now, and their validity is being questioned. While some have been found to be based in truth at the core, many (such as the ones listed here) have not.

You might also be interested in some other myths that were recently debunked: The Truth About 6 Holiday Health Myths. They involve: sugar and children’s behavior, holiday suicides, nighttime feasting and weight gain, toxic poinsettias, wearing hats, and hangover cures.

Here’s the inside scoop about those holiday myths.

5 Easy And All-Natural Cures For The Common Cold